Sitting on the stoop just north of Pape Station, this phone is perfectly positioned to watch all the buses that come and go. 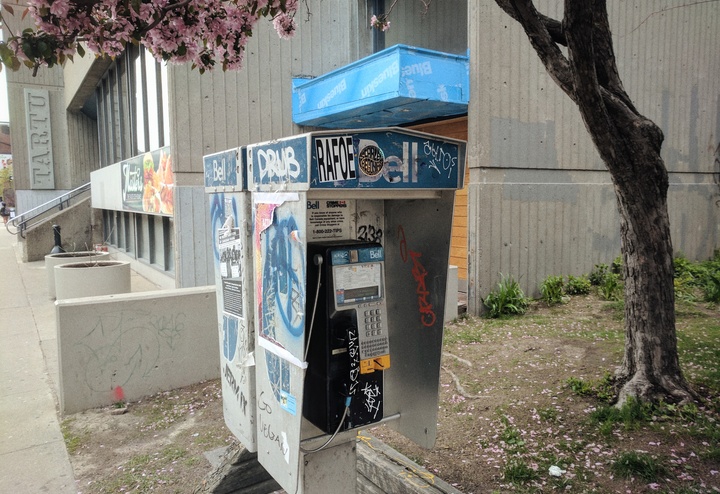 I doubt that the schoolchildren attending UTS have much occassion to use these conjoined twins, but they can often be seen using their cellphones to take "selfies" under the blossom tree during bloom. These phones are certainly used to the glamour of photography. While full-size booths are generally less common in the downtown core of the city, these classy sisters enjoy a small pocket of peace and quiet in a busy part of the city. Nothing serves to validate the humble payphone quite like a high profile placement in a popular, upscale district. These two phones see a lot of action sitting in clear view of the harbour and just within reach of the the most raucous outbursts of conversation coming from the Amsterdam BrewHouse. Nestled amongst the giant hospitals of University Avenue, this phone booth - old and worn as it is - seems to fit in with the forlorn shops around it. Much has changed in the Queen West area in recent years. Sadly, this Frontier Telecom phone did not survive the shifting of the trade winds. This flirty red number sits outside a cafe patio on St. Andrew and surely see a healthy amount of foot traffic passing by it. Trying to blend in with the locals, this payphone probably does a good job avoiding detection by most people walking by. Sitting at a strange, orthogonal angle on Wade Avenue. This pair of payphones is hard to miss if you frequent the Lansdowne Subway Station. In residential areas it was once common to see these classic Bell phone booths sitting directly outside the local corner store. This example on Jones Avenue speaks of a time when one might pick up a soda and make a call or two. The Roncesvalles area is a rare one in Toronto that still harbours quite a number of payphones. All, or nearly all, are Bell operated. This simple standalone box sits in a popular area for pedestrian traffic but given the local demographic of young, hip folk, I doubt it gets much use. 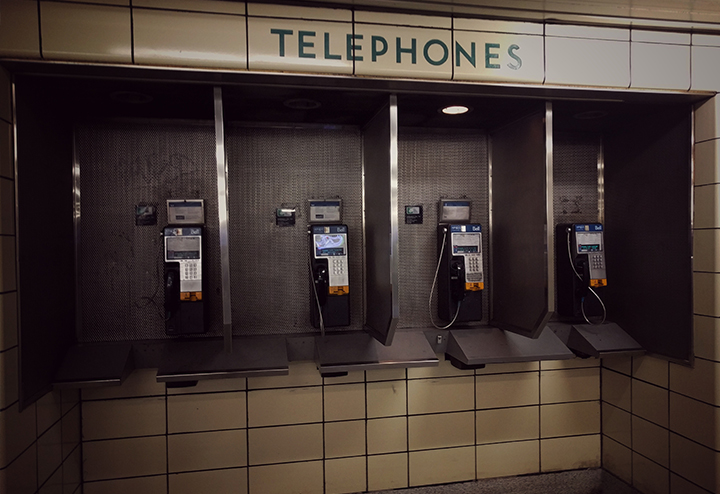 Large banks of payphones like this have become a relative rarity around the city but a huge amount of pedestrian traffic flows through Bloor-Yonge station every day, so perhaps this example is somewhat justified. The payphone housed in this cute enclosure - operated by Frontier Telecom - continues to serve the trendy youth-oriented neighbourhood of Queen West. Though payphones are not uncommon in Toronto, the dedicated phone booth is a very rare breed. This one sits next to The Centre for Women and Trans People at the University of Toronto on Spadina Avenue. While Toronto still has a large number of payphones for a modern metropolis, it is still rare to see them outdoors in free-standing enclosures. This example outside Victoria College on the University of Toronto campus has it's own small shelter. Of the two staff members present at Trinity College's security desk, only one was able to direct me to this oft-forgotten payphone. Inside the modern-day castle of Trinity College it appears to be the only option for those looking to use (or photograph) a payphone. Phones like these are a common sight as most subway platforms have payphones in Toronto. As BAI Canada's current deployment of cellular and wifi coverage drags on, payphones will continue to see some use. Sitting just south of the very bohemian Kensington Market, this non-Bell phone is definitely dressed for the part. Amidst the decorative pillars of Museum Station, this payphone is one of two - placed at either end of the platform - that stand as sentinels over this low traffic subway stop. After enjoying a day at the Royal Ontario Museum one may enjoy the convenience of this nearby subway stop, made all the better by the presence of a payphone nearest the west entrance. This brightly painted enclosure is located right by the corner of Kensington & Baldwin in the heart of Kensington Market. Like most phones in the area, it has been through a degree of client-performed cosmetic alterations. The many property holdings of the Toronto Transit Commision form a massive safe haven for Toronto's payphones. Much of the TTC's underground network of buildings and tunnels offer no cellular reception and therefor remain the absolute domain of the payphone. This example was found inside Kennedy Station. Based on my observations the phones in this area get a decent amount of use. These three stand on Dundas West, just east of the busiest stretch of Spadina Avenue. This style of wall-embedded payphone is not wildly common. I personally find this to be a shame as they are quite striking. This phone, recklessly wired in using exposed cable, sits just past the checkouts but is positioned such that it would be someone inconvenient should anyone actually use it.